Part of my recent Science North trip included seeing the Body Worlds Vital exhibit.  This exhibit is part of a series of Body Worlds exhibits featuring real human bodies that have been preserved using a processed called plastination.  Plastination was created by Dr. Gunther von Hagnes, and the resulting figures created through the process have been termed plastinates.  These plastinate bodies allow visitors to see the inner workings of real human bodies in a way that wasn’t previously possible.

The primary gold of all the Body Worlds exhibits is to increase awareness about the human body and to provide opportunities for health and physical education.  Body Worlds Vital places emphasis on the potential of the human body and the body in motion.  In this exhibit a number of the plastinates are staged in athletic activities such as running, fencing, and dancing to highlight the development of muscle structures, the potential of a healthy body, and the general inter-workings of the vital system. 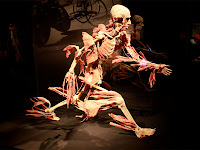 Additionally, the signage throughout the exhibit was really well done.  Each plastinate was accompanied by a textual explanation of what technique was used to render the plastinate and what parts of the body are being highlighted by the plastinate.  These textual explanations were accompanied by diagrams labeling muscles, bone structures, and major arteries.  The diagrams helped explain the plastinates and added to the educational component of the exhibit.  There was also oversize text and graphic panels with inspirational quotes relating to the human form throughout the exhibit.  These panels added to the reflective and respectful feel of the entire exhibit.

The exhibit wasn’t overly busy when I was there.  This allowed for a nice leisurely pace and for me to read all the text and spend ample time looking at each plastinate.  In contrast to the rest of the Science Centre where loud talking and running around are the norm, the majority of visitors looking at this exhibit moved at a leisurely pace and were speaking in hushed tones.  This was most likely due to the subject matter combined with the mood lighting and slow paced background music.  The whole atmosphere of the exhibit helped contribute to the educational atmosphere.

Have you been to a Body Worlds exhibit? Did you enjoy it?