This is the third post in a series focusing on Canada’s natural heritage, and more specifically the preservation of this natural heritage through the Canadian Parks System.   The first two posts can be seen here and here.

Kootenay is also home to a range of plants and animals.  The preservation of diverse nature of Kootenay’s landscape is in part responsible for the success of so many different ecosystems within the park – plants from the alpine, subalpine and montane ecological zones can all be found within Kooteny. 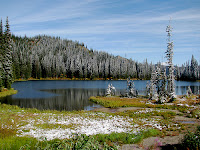 In addition to the great natural landscape Kootenay is home to the only landmark in the parks system named after James Bernard Harkin.  Harkin was a Canadian civil servant who is seen as the main advocate for the establishment of the Canadian Parks system.  Mount Harkin in Kootenay National Park is named after Harkin and his contribution to Parks throughout Canada.  A great article focusing on Harking by E.J. Hart appeared in the June-July 2011 issue of Canada’s History.

This is the second post in a series focusing on Canada’s natural heritage, and more specifically the preservation of this natural heritage through the Canadian Parks System.
The Point Pelee National Park is one of Canada’s smallest national parks, however the park attracts approximately 300,000 visitors annually.  The park’s southern location – the park share the same latitude as Rome and California – contributes to a unique climate, animal habitat, and natural landscape.

Point Pelee Park’s founding was based largely upon the work of the members of the Great Lakes Ornithological Club.  The club saw Point Pelee as an ideal to spot to track the migration of numerous bird species.  This interest in birds eventually became combined with the desire to preserve the natural landscape which attracted such a wide range of birds to Pelee.  As a result of the efforts of the Club the park was established as a National Park in 1918. 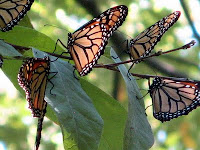 Today, more than 370 species of birds have been spotted in the Point Pelee area and many of the visitors to the park are avid birdwatchers. In addition to an ideal location for migrating birds, Point Pelee is on the route of migrating monarch butterflies.  Each fall the park is swarmed with monarchs traveling south, simultaneously the number of the visitors to the park swells as people attempt to catch a glimpse of thousands of butterflies at once.

Overall, the Point Pelee National Park is an excellent example of a park designed to preserve something very specific.  In this case the preservation is focused on the natural habitat of a diverse range of birds and butterflies.  Through the preservation of the natural heritage of Point Pelee Canadians are able to experience a part of Canada that is a far cry from the snow and ice that is typically associated with Canada.