Following my trip to Ottawa for the NCPH conference, I was in Montreal for the Quebec National Truth and Reconciliation Commission event.  While in Montreal I had an opportunity to check out some of the local built heritage and heritage organizations.  Part of a day was spent exploring the Montreal Museum of Fine Arts.

The Montreal facility isn’t as large as the National Gallery, however the exhibit space is still sizable.  I found the layout and flow between exhibits in the Montreal space better (eg. I didn’t end up all turned around in a gallery space with no idea of how to get out, like I did at the National Gallery).  The signage at the Montreal Museum is well placed and helped indicate a clear progression through the exhibits.

I found the mixture of eras at the Montreal Museum well done.  There was a number of galleries that contained modern and contemporary art, contrasted with gallery spaces featuring classical/early international art.  The balance of the the new and older art provided a sense that there was plenty to look at in the museum for everyone regardless of your art preference. I found the balance of gallery content much more evenly dispersed in the Montreal Museum than in the National Gallery.  The early international art collection in the upstairs of the National Gallery seems to go on forever, which though interesting can be overwhelming.

The Montreal Museum also has a substantial Archeology and World Cultures collection.  This collection includes artistic heritage items of numerous origins (Egyptian, Roman, African, Oceanic, Islamic, and Asian, etc).  This collection was displayed according to culture of origin and was well presented.  The variety of items in each exhibit was impressive and most of the items were surprisingly well documented considering their age and acquisition dates.

Overall I had a great visit to this space.  The Montreal Museum of Fine Arts has free admission to all of their permanent exhibits. So, if you are in Montreal  have the time I would recommend taking a couple of hours to explore the facility, it’s a great space architecturally and has a lot of visually and historically interesting artwork.

When planning a family trip to Ottawa a visit to Library and Archives Canada (LAC) is on the itinerary of very few Canadians.  The lack of visitors center and recent cut to open research hours makes visiting LAC difficult for researchers, let alone tourists.  LAC has no formal tourism competent and many Canadians would be hard-pressed to pick out the LAC building in Ottawa.

Conversely, the National Archives and Records Administration (NARA) building in Washington does an excellent job of packaging the Archives as a destinations for visitors.  For many visitors the main draw to the NARA are the historic documents that are on display — the Constitution, the Bill of Rights, and the Declaration of Independence all reside inside the Rotunda of the NARA. 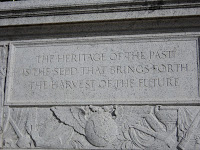 However, aside from these documents the NARA features a permanent exhibit  in an area called “The Public Vaults” and a rotating temporary Exhibit Hall.  The Exhibit Hall was closed during my visit but I did have a chance to visit the Public Vaults and the Rotunda. The Public Vaults display a number of interesting and historically significant documents and provide insight into archival practice.

What I found most compelling about the Public Vaults exhibit was the extent to which the exhibit educated the general public about the NARA.  For example, there was an interactive display that focused on what records are collected by the NARA and how to go about finding those records.  This display included sections such as “If my grandfather was in WWI would he be in the archive?” and “My ancestors immigrated to the United States, would they be in the archive?”  I liked this element of the exhibit as it highlighted the tangible uses of archival records and introduced people to archival research in a friendly way.

The Public Vaults also included an interesting section on conversation and preservation.  This section included information on the damage of light to paper records, fold damages, and the challenges of preserving so many different formats.  This section also highlighted the reasons why photography isn’t allowed in the NARA and the damage that photograph could have on documents.

My love of archives might make me a bit biased, but I really think the NARA building in Washington is well worth a visit.  Seeing documents that helped shape the United States is an experience in itself.  Additionally, the public vaults exhibit at the NARA is well throughout, educational, and includes a number of electronic or hands on components.  The building is not  merely a place to look at paper in, it’s a space that facilitates the active engagement of the past.