SFCC is an informal collective of librarians, archivists, and institutions who work with or hold primary and secondary material relating to Science Fiction and Fantasy.  The wiki provides a central resource and searchable list of SF archival resources for researchers.  It is also closely aligned with SFCC’s desire to connect those working on/holding SF collections.  As an archivist and a lover of SF I couldn’t help but be excited by this resource. 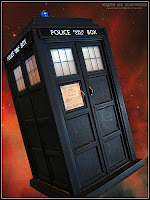 The BBC series Doctor Who combines fantasy, science fiction, and history; all of which happen to be some of my favourite things.  I’m actually kind of surprised that it has taken me so long to address the show on this blog and to look at it from a public history perspective.

Doctor Who was originally conceived as an educational program for children. The idea was that the episodes set in the past were to teach kids about history, while the space episodes would provide bite-sized facts about science. This concept was reinforced by the Doctor’s first two companions being a history teacher and  a science teacher.

Today’s version of Doctor Who has an increasing fantasy and includes content that would be downright frightening to children– weeping angles anyone?  However, I still think that the program does contain some historical content that is of educational value.  The BBC has actually created some lesson plans based on Doctor Who episodes. These lesson plans typically focus on episodes where Doctor Who visits the past (eg. Victorian England, England during WWII, the era of Vincent Van Gogh, etc).  The historic setting is then used to spark conversations about the past. 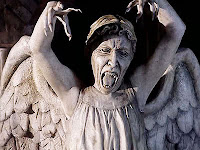 A large number of Doctor Who episodes fall into the category of ‘alternate history.’  They contain a bit of historical context, but the details — eg. Winston Churchill is using Daleks to fight the Germans during the WWII blitz — aren’t completely accurate.   In this particular instance the setting of WWII and the actual portrayal of Winston Churchill are fairly accurate.  Most episodes where the Doctor visits the past are like this, they contain grains of truth amongst the fantasy.  Doctor Who provides an introduction to a historical era which may inspire viewers to dig into the past to learn about what actually happened.

The Doctor Who of today is a far cry from children’s educational television.  However, there are gems of historical knowledge and context amongst the aliens, TARDIS, and sonic-screwdrivers.  And besides, who doesn’t want a TARDIS that would let them travel through time and space? 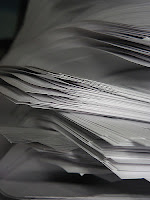 I recently rediscovered my love for fantasy fiction.  This love was rekindled while I read the Mistborn series by Brandon Sanderson.  In addition to being an excellent fantasy series, the Mistborn series allowed me to consider the portrayal of archives and historians in works of fantasy.

Sanderson’s Final Empire includes a sect of people who are known as Keepers.  In a glossary Sanderson defines the Keepers as “an organization of Feruchemists dedicated to discovering, then memorizing, all the knowledge and religions that existed before the Ascension.”  Throughout the series the Keepers are depicted as the holders and preservers of history, without them the past would be erased from all memory. The Keepers are also dedicated to sharing their knowledge with those in need.

This act of remembrance and sharing strikes me as the essential reason for the establishment of archives and the ultimate goal of many historians.  Like many other fantasy authors, Sanderson uses the act of remembering and the premise of archives to advance the plot in his novels. 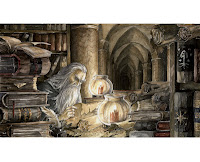 A more well known example of historical research and archives impact the plot of works of fantasy can be seen in Lord of the Rings.  Upon learning of the ring held by Bilbo/Frodo Gandalf travels to Minas Tirith in Gondor to research the One Ring. There Lord Denethor grudgingly allowed Gandalf to search among his hoarded scrolls and books. There he found the description of the One Ring written by Isildore.

This research takes Gandalf 17 years to complete in the books and is shown as a brief clip in the Fellowship of the Ring movie.  Tolkien uses Gandalf’s time in the ‘archive’ and reliance upon historical sources to advance his plot.  It is Gandalf’s historical research that eventually allows him to discover how to ‘test’ the ring held by Frodo.

Archives, historical research, and other avenues of examining the past often appear in works of fantasy.  Fantasy worlds by their very nature have unique (as in following accepted history) histories. This uniqueness often requires authors to explore the past of a world in a preface, through stories/oral histories, or devices such as archives. 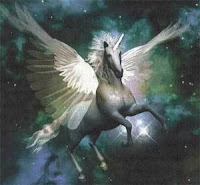