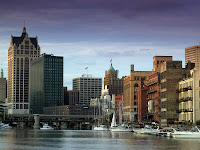 One of the best parts of day two of #ncph2012 was the walking tour of downtown Milwaukee.  The tour was put on by Historic Milwaukee Inc.  This particular tour was especially crafted for the conference and combined elements of various different tours HMI gives. I learned lots about local architecture styles, local history, and the preservation efforts in the city.  I took an abundance of pictures which I will share on this blog at a later date.   Additionally, I volunteered to be a reviewer for the Public Historian and will be writing up a review of the tour and submitting it the journal.

The other major learning experience I had yesterday focused on my current job at the Shingwauk Residential Schools Centre.  Coming to the conference I was aware that there are national differences in the Canadian Residential School system and the US boarding school system.  However, I was unprepared for so many history focused people to have no knowledge of either system.  On the plus side, this has contributed to a number of educational moments where I have been able to share a bit about First Nation-Settler Relations.  Many people I’ve spoken to have been very receptive to learning about the IRS system in Canada and surprised at the extent to which Canada is still struggling with this aspect of our history.

The Legends Project began in 2002 as a small CBC initiative in Iqaluit, Nunavut to record, archive, and create radio dramas of the oral traditions of Inuit and First Nation communities in Canada. Eventually these oral stories and dramatizations were played on CBC Radio in both English and their original Indigenous language.

Currently, the project has eleven segments, each of which highlights the unique culture and language of a distinct community. In addition to being broadcast nationally the Legends Project allows for a high quality recording of endangered languages and traditions to be preserved. Each segment is a unique mixture of English and indigenous language and song, and provides a unique look into traditional practices of a community.

The most recent segment of the Project focuses on the traditions of the Ahtahkakoop, a Plains Cree nation in Sandy Lake, Saskatchewan. This segment highlights the linguistic, cultural, and social struggles of members of the Ahtahkakoop. It also retells a number of the community’s traditional stories about creation, family, respect, and survival.

This past week I attended the Hidden Legacy Conference in Winnipeg. The conference featured an interesting combination of speakers and highlighted a variety of view points relating to trauma and inter-generational impacts.

The first day of the conference included eight main speakers and a panel discussion. The first keynote speaker of the day was Dr. Gabor Maté. I found Maté to be one of the most interesting speakers of the entire conference. His talk on the “biology of loss” focused on the physiological and psychological impacts of trauma, the biology of addiction, and the impact of parental health on children. Maté argued that First Nation people are not more genetically predisposed to alcoholism, drug use, depression, and addiction in general. Rather, addiction is a symptom of a much larger societal problem and a result of continuous trauma. Maté also emphasized the importance of early childhood experiences in shaping healthy or unhealthy lifestyles and the need to look at the interconnected nature of mental and physical health.

Juxtaposed with Maté’s presentation was Eduardo Duran‘s discussion of the soul wound. Duran’s work includes a much more spiritual component than the work of Maté. Duran emphasized the idea that trauma is a spiritual entity. He asserted that trauma has an energy, and it is that negative energy which plagues the victims of abuse and violence. Despite having different definitions of trauma both Duran and Maté argued for the need to treat inter-generational trauma in a holistic way.

In addition to the more psychological discussions of trauma there was a number of interesting speakers who discussed their first hand experiences with coping with trauma. Vern White, Chief of Police Ottawa, provided an interesting perspective on Northern Native communities. White focused on the general population’s lack of awareness of the welfare of First Nation people. White emphasized the need for engagement of both parties during reconciliation and the interconnected nature of our society. A hurdle as large as racism and trauma can’t be overcome unless everyone works together.

Similar to White, a workshop run by Ruth and Greg Murdock focused on the personal experience and societal impacts of trauma. This workshop emphasized the impacts of lateral violence, vicarious trauma, and techniques for overcoming hurt.

The full conference agenda can be seen here. I am looking forward to a number of a sessions including:
–Elijah Harper, Breaking Barriers/Breaking Silence
–Cindy Blackstock, Aboriginal Children: The Parallels of Residential Schools and Child Welfare
-The screening of A Windigo Tale by Armand Garnet Ruffo.
-A workshop on community trauma and healing. 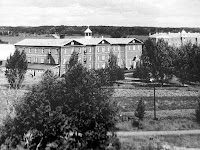 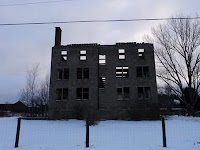 The site is now private property and is located on an aptly named “Garnier Road.” The boys’ school was torn down in 2004. The girls school was ravaged by fire in 1958 however the shell of the building is 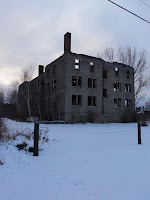 still standing. Above are the pictures of what is left of the residential school.

Today’s #reverb10 prompt was: Body integration. This year, when did you feel the most integrated with your body? Did you have a moment where there wasn’t mind and body, but simply a cohesive YOU, alive and present?

The moments this year where I have felt the most integrated have occurred since I started my new job. I have recently had the opportunity to participate in three Aboriginal smudging ceremonies. Each time I have participated in a smudge the feeling in the room has been one of thoughtfulness, remembrance, gratitude, balance, and unity. I feel fortunate to have been able to participate in these activities. Smudging also brings to mind the importance of preserving traditions, especially in an oral, marginalized, or aging society. Actively practicing traditions have the potential to allow people to become in touch their history, learn more about their culture, and to become integrated with their roots. 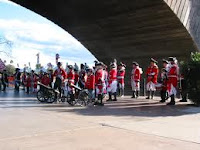 This weekend marks the 125th anniversary of the Siege of North Battleford. This event as traditionally has been commemorated as a siege by the Métis and Cree on the white settlers in what would eventually become Saskatchewan. A recent article in the Globe and Mail, suggests that there may be some problems with the way in which Parks Canada has been reenacting this event.

Tyrone Tootoosis, an aboriginal historian, insists that no siege occurred. Rather the First Nation peoples approached North Battleford due to starvation and that the word siege suggests a much more violent action than what actually occurred. Parks Canada representatives have agreed that the event was not really a siege in the traditional sense and that visitors to the re-enactment will be give the full story. Additionally Parks representatives insist that they always attempt to portray multiple perspectives of historical events.

Attempting to portray multiple perspectives through a reenactment is a fairly daunting task. It is typically the winners who deem a battle worthy of commemorating and it is often the winners who preform reenactments. Granted, the reenactments always include the other side. But, at times this seems as though the opposition are only included so the winners have someone to dramatically defeat.

Is it possible to portray a completely unbiased historical account? Maybe. But this is an extremely complex task and often results in a whitewashed, passionless account of events. Should an attempt be made to portray history as accurately as possible? Yes. At times this may even mean changing the way in which things have traditionally been commemorated or named.

However, historical interpretations are limited by the sources available to historians, and this often limits how events are understood. This is particularly the case in North Battleford and many other events involve First Nation peoples. The oral nature of First Nation society means that written documentation is primarily only available from the settler perspective. Until further exploration of First Nation past through oral history and non written history is explored, it is likely that many historical interpretations will continue to be focused on the settler experience.

Session 1: Aboriginal Oral History and Canadian Courts. This session dealt with the ongoing debate about the validity of using oral history in court trials. Christopher Bracken’s paper The Judge and the Pharmakon: Oral History and Aboriginal Rights was particularly interesting. Bracken examined the validity of oral history from a philosophical and literary perspective. The debate between writing and the spoken word have been going on since the time of Plato. All of the presenters highlighted the importance of understanding the difference between writing and oral histories and appreciating the uniqueness of each form of communication.

Session2: The First Draft of History: Archives, Archival Selection and the Determination of History. Despite the diverse topics which the papers in this panel covered, they were linked together by their focus on the use of archives. This session drove me to question the impact which filing systems, descriptions, archival organization, archival location, and who is keeping the records have on history. Archival material is a product of a social environment and cannot be viewed in isolation. During the discussion portion of this session a question was raised about the validity of private researchers using archival sources for litigation services. Dara Price of LAC answered this question in a commendable way. She pointed out that conducting research for profit and for a specific purpose is nothing new, and that archives have often been used by private researchers. This session reinforced the importance of being critical of archival material and contextualizing sources.

Session 3: Authority, Aboriginality, and Expertise. The papers in this session were linked by their emphasis on aboriginal agency. All three presenters focused on the relationship between governments and aboriginal peoples. I found Martha Walls’ paper on Exploring Federal Culpability in Residential Schooling particularly interesting. Walls examined the relationship of day schools and residential schools in the Maritimes. She suggested that the poor state of day schools, assisted the government in coercing First Nations into the residential school system. Overall, this session highlighted the linked relationship between first nation peoples and government decisions, and the way in which First Nations have frequently adapted to changing circumstances.