One of my favourite parts of the built heritage landscape that I explored in Montreal was the old churches that are located throughout the city.  These churches are often tucked in amongst office buildings, hotels, and other modern day amenities.  Additionally, a number of the churches have multiple buildings on their properties such as: a rectory, lodging for religious orders, and office space in addition to the sanctuary space.  The pure size of the church properties often surprised me.  I had thought that many of the churches would have given up land or been torn down to make space for development.  I was also happy to see one church that was in the process of being renovated (with keeping the great architecture in tact) for adaptive reuse as a condo and recreation facility.
I also loved the decorative copper sculpture and roof work that was prominent on a number of the Catholic and Anglican churches in the city. Here are photos of some of my favourites.  The first two photographs are of Cathédrale Marie-Reine-du-Monde, which has been designated as a national historical site. Photo credit goes to Andrew MacKay.

The idea to do a weekly photo series was inspired by Andrew Smith’s recent Historical Photograph of the Day feature over and on his blog and Kayla Jonas’ blog series on photography of Hamilton buildings. In the upcoming weeks I plan to focus on historical Northern Ontario images and to highlight the variety of sources available for local history research in the North.

This week’s Northern Ontario historical photograph of the week is of the Pickle Line at Algoma Steel (now known as Esar Steel) in Sault Ste Marie. This photo is from the local history collection held by the Public Library in Sault Ste Marie. A number of photographs from the library’s local history collection have been digitized and posted online using OurOntario. 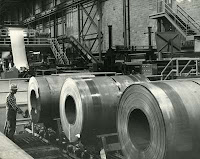 As my previous post mentioned we recently had a class on writing for a public audience. We were given the assignment of writing a 400 word newspaper article on any topic of historical relevance. My ‘article’ was a blog idea I’d been toying with for awhile, and here are the fruits of the assignment:

Your family has been attending the same church for as long as anyone can remember. Your family has celebrated numerous marriages and mourned many deaths in the same church. This memorable and center of much community history is being turned into condos. You have virtually no means of stopping it, but on the plus side the condo will have a very nice pool.

Throughout Toronto and Montreal numerous historic churches over have been sold, are slated for demolition, or are currently being renovated into condominiums. Without active preservation efforts historic churches, like all old buildings, are susceptible to the demands of our changing society.

The issue is not the merely loss of beautifully constructed religious buildings. Rather, irreplaceable community history is being forgotten and at times destroyed. In Montreal, the Church of Saint-Eustache, which features stones damaged by British cannon fire from 1837, and where more than 100 Quebec patriots died, is at risk of being sold or demolished. Many churches have similar historical significance, even if it is just the history of the parish and the community which was once based around the church.

Heritage designation can discourage developers from buying historical churches, as it limits the renovations which can be completed. However, only 75 of Toronto’s many churches are heritage properties. But is heritage designation enough? Often heritage designation only preserves exterior elements, when some of the most historically significant elements are located inside churches. The transformation of churches into commercial spaces can destroy historical interior architecture and eliminate places of rich community heritage. Creative housing and business solutions are essential in an urban world, but historical buildings are far more culturally valuable than another rock climbing facility.

After thinking about this topic a bit more, I began to consider how the internet and digital publishing can be used to support various activists groups. Similar to expanding the range of historical literature, digital technology can be used to spread concern about virtually any cause. With websites, blogs, twitter, facebook groups, and numerous other wide reaching, getting the word out isn’t hard. the internet as a forum for activists isn’t a new thing, but I think public historians and heritage groups need to continue to expand their online presence through as many different types of technology as they can. In most cases this only presence can be built up with minimal costs, and by anyone who has a rudimentry understanding of the internet.