As the busy tour season approaches at Shingwauk I’ve been thinking a lot about the delivery of this programming and that role it plays in educating people about residential schools, colonialism, and Indigenous communities. 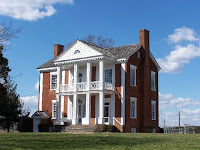