This week the archive I work at hosted a sewing action as part of the (official denial) trade value in progress project.   This project engages people in discussion and reflection relating to reconciliation, truth telling, and Canada’s history of colonialism and Residential Schools.  This interactive art project stimulates discussion about Canada’s history while allowing participants to engage in a tactile activity.

The work initiated by Leah Dector and curated by Jamie Isaac, features a 12×14 feet composite of Hudson Bay blankets sewn together, with Prime Minister Stephen Harper’s 2009 statement that “we also have no history of Colonialism” sewn at the center of the blankets.

At exhibitions and public showings of the work, the general public is invited to write down their responses to the piece in an accompanying book.  These responses are then taken to sewing actions, where participants can choose any response and hand-sew it onto the blanket.

The interactive component of this project means that the visual appearance of the Hudson Bay blankets are constantly evolving based on what participants decide to sew into the blanket. The project reflects the thoughts and decisions of the sewing participants and the visitors who wrote down their responses to the work.  The interactive component of this project resonated with me in  terms of educational programming and public history.

The individuals who participated in the sewing action this week talked a lot about history based topics while sewing their chosen words into the blanket.  Much of the discussion revolved around Residential Schools, land rights, the history of the Hudson Bay Company, the continued marginalization of Indigenous people, and a variety of other historically informed topics.

The sewing action actively engaged participants in an interactive art project, Canadian history and engaging discussions about Indigenous rights in Canada.  Learning in a less structured environment combined with a tactile activity has the potential to be much more memorable than a traditional lecture about Canadian history or presentation about the Hudson Bay Company.  It’s great to see creative projects engaging people with the past. 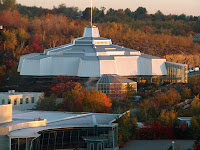 This past weekend I spent the better part of the day at Science North.  I have fond memories of Science North from family outings as a child and my recent visit rekindled a lot of my enthusiasm for hands on learning. I work in an archive where most visitors have very little hands on exposure to the archival material.  Science North reminded me of the importance of interactive learning and making information accessible in creative ways.

One of my favourite parts of my visit included the floor dedicated to the landscape, animals, and ecosystems of Northern Ontario.  This floor includes a ‘forest lab’ with trees, a nocturnal room complete with flying squirrels, and a number of other common Northern Ontario animals.  The majority of the animals on this floor have spent their entire lives at Science North and are quite friendly — I actually saw a staff person petting a porcupine.  This floor also includes an ‘erosion table’ that I remember loving as a kid.  The erosion table is a giant sand and water table that allows children to see the impact of streams and running water on soil.  Lots of messy fun.  Overall, this floor allows visitors to see first hand distinct features of Northern Ontario’s landscape and to touch and feel a variety of Northern animals and plants.

One of the special exhibits currently at Science Norther is Wildfire! A Firefighting Adventure in 4D. This exhibit was created in conjunction with the Ministry of Natural Resource (MNR) and the Ontario government and focuses on the MNR’s forest fighting efforts.  The 3D movie and accompanying motion seats provide insight into the workings of water bombers and forest fighting ground crews work.  This was a really well done experience; though I do not recommend taking small children to to see Wildfire! as a couple of the smaller children in the audience found the experience on the frightening side.  The Wildfire! trailer can be seen here.

Overall, I like Science North because  it is truly a place for both kids and adults.  I went sans children and had a great time, but there are tons of activities for families with children.  Additionally, unlike the Ontario Science Centre in Toronto, Science north is rarely swarming with visitors.  Adults can take their time enjoying the hands on stations without worrying about taking a child’s place.  Additionally, I found that I learned a surprising amount about Northern Ontario in a fun and interactive way.  The visit to Science North was well worth the trip to Sudbury.

Family, voice, sense of place, and time travel.  According to Benjamin Filene, these are the core themes in history created by non professionals, all of which are driven by a personal and emotional approach to the past.  Filene’s recent Public Historian article, “Passionate Histories: ‘Outsider’ History-Makers and What They Teach Us,” grapples with the development, validity, and spread of history created by persons outside of the formal history profession.

The struggle to quantify what constitutes ‘real’ or ‘good’ history is nothing new.  Public history as a field faced considerable from traditional academia during its rise to acceptance.  Genealogists are often scoffed at by academic historians and local historians are over looked.  Filene does not ignore the professional/outside divide in the history field.  Rather, he suggestions that both parties could learn from each others strengths.  Granted, suggesting two segregated sects work together is a lot easier said than done.

Public history that doesn’t reach the public isn’t very good public history.  Similarly, it wouldn’t hurt more traditional historians to try new avenues of disseminating their research.  History practitioners outside of the formal field have interpretation and display techniques that could easily be adapted to public history.  Focusing on individual stories, using clear language, providing specific examples instead of broad themes, and relating history to present events are all approaches which can assist in interpretation. Some museums have already begun adapting new methods of interpretation.  This often means changing their exhibit style to be more personal and emotional and less telling an overarching story of a historical event.

Academic and professional history can be emotionally compelling.  However, this typically isn’t the aim of professional history or something that is considered a top priority in presentation.  But, when people identify and can relate to history they show greater interest and are more likely to actively participate.  Historians of all shapes and sizes need to look at how they are reaching the public and begin to draw on interpretation and outreach work done by those outside of their immediate circle.

This is the sixth segment in a series of posts entitled, “Collection Glimpses.”  Each post in the series  focuses on a unique collection, innovative repository, or a not well known cultural heritage institution.

The most unique thing about the Manitoba Museum is perhaps its emphasis on 3D walk through galleries within a museum setting.  Unlike most museum settings which are two-dimensional spaces, three-deminsional galleries provide a feeling of immersion in a setting. Some of the Museum’s notable 3D galleries include: Nonsuch, a full-size 17th century sailing vessel, the Urban Gallery, which takes you back in time to Winnipeg during the 1920′s, and the Ancient Seas exhibit, which includes three screen animation of what the sea was like in Manitoba years ago.  Ancient Seas was featured in the March/April issue of Muse.

The Manitoba Museum also has a number of innovative fundraising programs.  The Museum`s Adopt an Artefact program, an idea similar to the WWF`s adopt an endangered animal program, allows donors to symbolically adopt an artefact of their choice.  The Adopt an Artefact helps make donations a bit more tangible to donors and is allows non-display artefacts to be brought to the attention of donors. Other fundraising initiatives allow donors to donate to a special project.  These projects may include preservation work on a large exhibit, development of an interactive exhibit, or outreach programming.  Similar to the adoption program, special project fundraising helps people visualize and identify what they are donating to.

The Museum`s website provides a great overview of the organization`s educational programs and galleries. Additionally, the museum has digitized part of its collection and made it available via a searchable database.  Each item in the database includes a picture and basic descriptive identifiers.  The collection photographs are a great resource, however I wish more contextual and historical information was available about the collections.