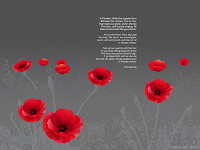 The Globe and Mail in the days leading up to Remembrance Day has included a feature called Dear Sweetheart: Letters Home from a Solider. The letters are from Canadian David K. Hazzard to his wife Audrey, he wrote over a 100 letters in total to her. The letters are very personal, emotional and serve to highlight the trials which numerous soldiers went through. Letters by Hazzard and other soldiers are a valuable way of examining the War and serve as a very emotional type of commemoration.

In addition to the Globe and Mail series, pretty much any media outlet you can think of has done some type of feature on Remembrance Day. History Television is currently airing a Week of Remembrance which focuses on various nationally defining battles and Canadian trials in the war. Similarly the CBC had both television and digital representations of Remembrance Day ceremonies and the CBC Digital Archives has a number of recommended videos on Canada Remembering.

With the amount of accessible information I hope everyone took at least a moment to think about the role which War has had in forging the history of our country and to remember the sacrifice of those who believed in something bigger than themselves.