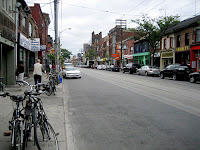 The premise behind the production is very similar to a historical walking tour.  The show takes the audience on a promenade-style tour of Queen West by a fictional condo developer, which allows theater to be intermingled with built history and local memories of the area.

The idea of incorporating theater into history isn’t anything new –  reenactments and many living history sites have been doing this for years.  However, Tale of a Town attempts to combine theater, oral history, built heritage, local history, and music.  I’m interested to know if similar productions have been undertaken in other cities or venues.