This is the fourth segment in a series of posts entitled, “Collection Glimpses.”  Each post in the series  focuses on a unique collection, innovative repository, or a not well known cultural heritage institution. 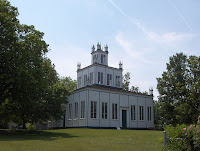 The Sharon Temple National Historic Site is located in Sharon, Ontario, a small community within reasonable driving distance to Toronto.  The main feature on the site is a temple constructed by the Quaker Children of Peace organization in the late 1820s. In addition to the large central temple, the site includes eight additional historic buildings in a park setting.

Prior to the 1950s the Sharon Temple Museum was initially encompassed under the work of the York Pioneers and York County Museum.  During this period the site focused on the broad history of York County.  After 1950 the site began to focus more on the role of the Children of the Peace and develop a site independent from the general history of the County.  In 1991, the Temple was dedicated as a National Historic Site based on its architectural significance.  Since 1991, a cookhouse, drive shed, and other out buildings have been replicated and programming and collections have grown to reflect the original state of the Temple.

Perhaps the most remarkable feature of the site is the restored architecture features of the site.  The Temple boasts multi-tier construction, a Jacob’s ladder inspired staircase, and a pipe and barrel organ. In addition to the great built heritage on the site, the Temple does a variety of outreach programming including an annual concert series and educational tours.  Very little of the artifact collection is available for viewing online at this point, however a short digital exhibit about the site was put together in conjunction with the Archives of Ontario.