This is the second post summarizing my experience at the AAO 2014 conference. The first post, “AAO 2014: Context and Commemoration” can be seen here.

Archives and Remembering
This session focused on two community museums/archives and their efforts to commemorate community histories.

The first pair of presenters were Laura Camilleri and Wayne Townsend from the Dufferin County Museum and Archives (DCMA).  Their presentation, “Remembering the Wars…Digitally” focused on the DCMA efforts to commemorate Dufferin’s veterans.  For the purposes of this project veteran was defined as anyone who had served in any conflict in any capacity.  The project allowed for archival material to be linked to museum collections and placed online via the Duff Stuff portal.  The portal is fee based.  However DCMA members get access as part of their membership fee.  Camilleri and Townsend highlighted some of the unexpected rewards of their project such as: building community partnerships, increased research requests, increased donations to the archive, and collaboration with local schools.  Having grown up near the DCMA and volunteered there it was nice to see some of the positive ongoing work and community outreach occurring within the institution.

The second set of presenters in this session were Mary Gladwin and Patricia Phelps who focused on the Oxford Remembers project. This initiative aims to commemorate the men and women who participated in WWI both at home and overseas.  Oxford County will hold 100 special events and programs from 2014-2018 to remember the 100th anniversary of the First World War.  Gladwin and Phelps highlighted the project’s galvanizing force and the enthusiasm of libraries, archives, museums, and community based groups to host commemorative events.  Everything from plays, pigeon shows, art displays, traveling exhibits, and film screenings will be held as part of the project.  Overall the project aims to raise awareness about the rich history of Oxford and the roles Oxford citizens played in the war effort.  This presentation was great inspiration for anyone interested in community engagement in collaboration.  It highlighted the benefits of working with multiple partners and keeping costs low through shared events and promotion.

Gillian Hearns presented on “Making the 150th and 175th Anniversaries of the Roman Catholic Archdiocese of Toronto.” Hearns’ presentation recapped the Archives of the Roman Catholic Archdiocese of Toronto involvement in the 1991 celebrations around the 150th diocese anniversary.  At this point the Archives was relatively new but the 150th celebrations helped bring legitimacy to the archives and highlight the value of the archives.  Hearn’s presentation also looked forward to the upcoming 175th anniversary that will be occurring in 2016.  Building on previous commemoration and history work Hearns described the 175th as an educational opportunity.  She saw the archive being tied to the larger diocese commemoration plan and focusing efforts on promoting the archive to internal stakeholders.  Hearn’s talk emphasized the importance of learning from past commemoration efforts and the role that commemoration can have in promoting the use of archives.

Hearn’s presentation was followed by Kate Rosser-Davies and her work commemorating the “Jubilee Years at St. Michael’s Choir School.”  The case study explored by Rosser-Davies focused on the 75th anniversary celebration of St. Michael’s Choir School and the commemorative publication of Seventy-Five Years of Service in Song.  At the time of the 75th anniversary the archives at St. Michael’s was newly established and Rosser-Davies unexpectedly played a key role in the publication process of Service in Song.  The publication was community driven and school alumni were actively involved in the books authorship.  Rosser-Davies highlighted the challenges of managing a community based publication including editorial burnout, inconsistent voicing, factual issues, and managing so many contributors.  Despite these challenges the book’s community based nature did allow for stakeholders to learn about the value of archival collections and the importance of preserving the school history.  Rosser-Davies indicated the donations to the school archives increased following the book project.  Service in Song is a great example of school archives being used for commemorative purposes and the challenges of managing a community based publication. 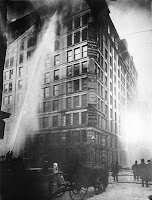 The July/August issue of Archival Outlook published by the Society of American Archivists contains an interesting article on the history of the Triangle Factory Fire and the redevelopment of a commemorative website about the fire.

The re-launched site in January 2011 by the Kheel Center for Labor-Management Documentation and Archives at Cornell University’s ILR School. This relaunch was timely as 201l marks the centennial anniversary of the fire. Despite including a detailed description of the development and content of the website the Archival Outlook article didn’t actually include a link to the site.  Thankfully Google came to my rescue, and the site can be found here.

Some of the unique parts of the site include:

The site includes a mix of primary and secondary sources and is a great place to start for students and others looking to learn more about the Triangle Factory Fire of 1911.