Downtown there’s a parade
But I don’t think I want to go
Smart as trees in Sault Ste. Marie
I can speak my mother tongue
Passing laws, just because
And singing songs of the English unsung
-“Born in the Water”, The Tragically Hip

If you’re not from Sault Ste Marie you might not understand the local reference made by The Tragically Hip in their song “Born in the Water.”  The song is about the Sault Ste Marie Language Resolution and the historical connections of the city to the French community.

The French Language Services Act in Ontario protects the right of individuals to receive provincial government services in French in specific areas of Ontario. The act outlines 26 designated areas which guarantee French language government services. In these areas Francophones make up a minimum of 10% of the population.  Services provided by municipalities are not covered under the act and it’s up to each municipality to decide if they offer services in French.  The French Language Services Act was adopted on November 6, 1986; and came into effect in 1989.

Sault Ste Marie is included under the act as all of the Algoma District is a designated area. The timing of the Sault Ste Marie Language Resolution, less than a year after the Services Act came into effect speaks volumes.

Coinciding with the timing of the French Language Services Act in 1987 local controversy erupted when a group of local Franco-Ontarians lobbied for a French school to be opened in Sault Ste Marie. In 1988 a group of Franco-Ontarian parents led by Solange Fortin took their case for a French language education environment to the public board of education.

In response to this lobbying the Sault Alliance for the Preservation of English Language Rights (SAPELR) was formed and began working with the Alliance for the Preservation of English in Canada (APEC).  APEC was actively campaigning against the French Languages Services Act and ultimately was successful in convincing 47 of Ontario’s 839 municipalities to pass resolutions similar to the Sault Ste Marie Language Resolution. In Sault Ste Marie SAPELR and APEC were responsible for a petition being brought to city council demanding English only services.  The petition was signed by 25,000 people out of a population of approximately 85,000.

At the time of the Resolution about 4% of Sault Ste Marie’s residents identified as Francophone. But historically Sault Ste Marie has strong ties to the French community, was founded by French speaking missionaries, and once served as a meeting place for traders and travellers from a range of cultures In the days following the resolution Sault Ste Marie was on the national news and served as a flash point during the Meech Lake Accord.  The anti-French backlash was felt by many Francophones in the region and a number of French families moved away from Sault Ste Marie as a result.

In 1994 the Language Resolution was struck down and in 1999 the city council minutes were amended to show that the 1994 Resolution was unjust. In 2010 City of Sault Ste Marie Mayor John Roswell apologized to French Canadians for the City’s actions. One might be able to brush this instance off as the fault of a misguided city council and blame APEC’s influence for the passing of the Resolution.  But the damage to the local French community and the tensions which underpinned the resolution still exist today.

This past summer a Service Ontario outlet in a small community east of Sault Ste Marie was threatened with closure because of its non-compliance with the French Language Services Act.  The outlet is staffed by a single person and provides a vital service to a community that would otherwise have to drive an hour to renew license plate stickers and access other Service Ontario programs. The sole staff person at this location does not speak French.

Currently if someone requests French language services another Service Ontario outlet where French speaking staff are available will be contacted using speaker phone. In the past five years this service has not been accessed once.  After much local lobbying, including a Rick Mercer style YouTube rant, the Service Ontario outlet is staying open.  Many of the people protesting this incident were concerned about the impact on access to services in the community and were not anti-French in their comments.  But some were quick to complain about bilingualism and “French privilege”.  Personally this incident highlighted how quickly things can escalate and the ongoing tension between French and English speaking Canadians.

Today French Language education is available in the Sault, the Le Centre francophone provides French language community programming, city hall flies the Franco-Ontarian flag, and the Franco-Ontarian community continues to preserve its rich heritage.  And almost every time The Tragically Hip come to town they play “Born in the Water” and remind a community of misguided past decisions.

In case you missed it, Algoma University’s Shingwauk Residential Schools Centre and Arthur A. Wishart Library recently won the 2013 SSMARt Innovation Project of the Year Award.  The award recognizes an “organization whose IT/science project demonstrates leadership and/or creative use of science/technology” and includes “benefits such as the advancement of the organization, improvement of client/customer services and positive impact on the science and IT community or the community at large.”

The complete details of AlgomaU project and the SSMARt press release can be seen here and here.

[Note: I’ve been involved with this great project since 2010, so this is a bit of shameless promotion for the work that I and many others are involved in] 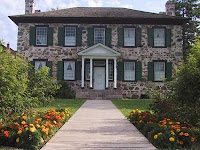 I recently made a visit to the The Ermatinger-Clergue National Historic Site in Sault Ste Marie, Ontario. The site includes the original Ermatinger stone house and the Clergue Blockhouse. The Ermatinger house is locally known as the Old Stone House and was built between 1812-1814. The house is the oldest stone house north of Toronto. The first resident of the House was Charles Oakes Ermatinger (1776-1833), who was a prominent figure in Lake Superior trading.

The initiative to make preserve the Ermatinger house began in the last 1960s and currently operates as a house museum which reflects the domestic and professional life of Charles Oakes Ermatinger and other prominent residents the House between 1808 and 1870. The physical structure of the house has been remodeled to look like it did in the era of Ermatinger. 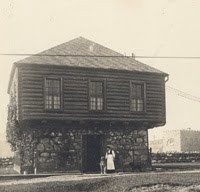 In 1996 the Clergue Blockhouse was to be demolished for the expansion of the St. Mary’s Paper Mill. As a result of community and heritage efforts the building was moved to the Ermatinger House site in 1996. The lower portion of the Blockhouse was constructed in 1819 as was part of a powder magazine belonging to the Northwest Company. In 1894, Francis Hector Clergue bought the property surrounding the old powder magazine. Clergue converted powder magazine into a space suitable for his home and office. It is this stage of the Blockhouse that has been restored in the historic site.

I will admit that prior to my visit to the site I had little background knowledge of either buildings or residents of buildings. It was interesting to learn about the place of these buildings in local history. Additionally, the combination of the two buildings on the same site also allows for the emphasis of Sault Ste Marie as a trading hub and allows the site to provide educational programming on the fur trade and local industry. However, overall I think I was most interested in the local efforts undertaken to return both buildings to their former states. The site highlights the potential of local history sites and the ongoing efforts which are required to preserve heritage buildings.